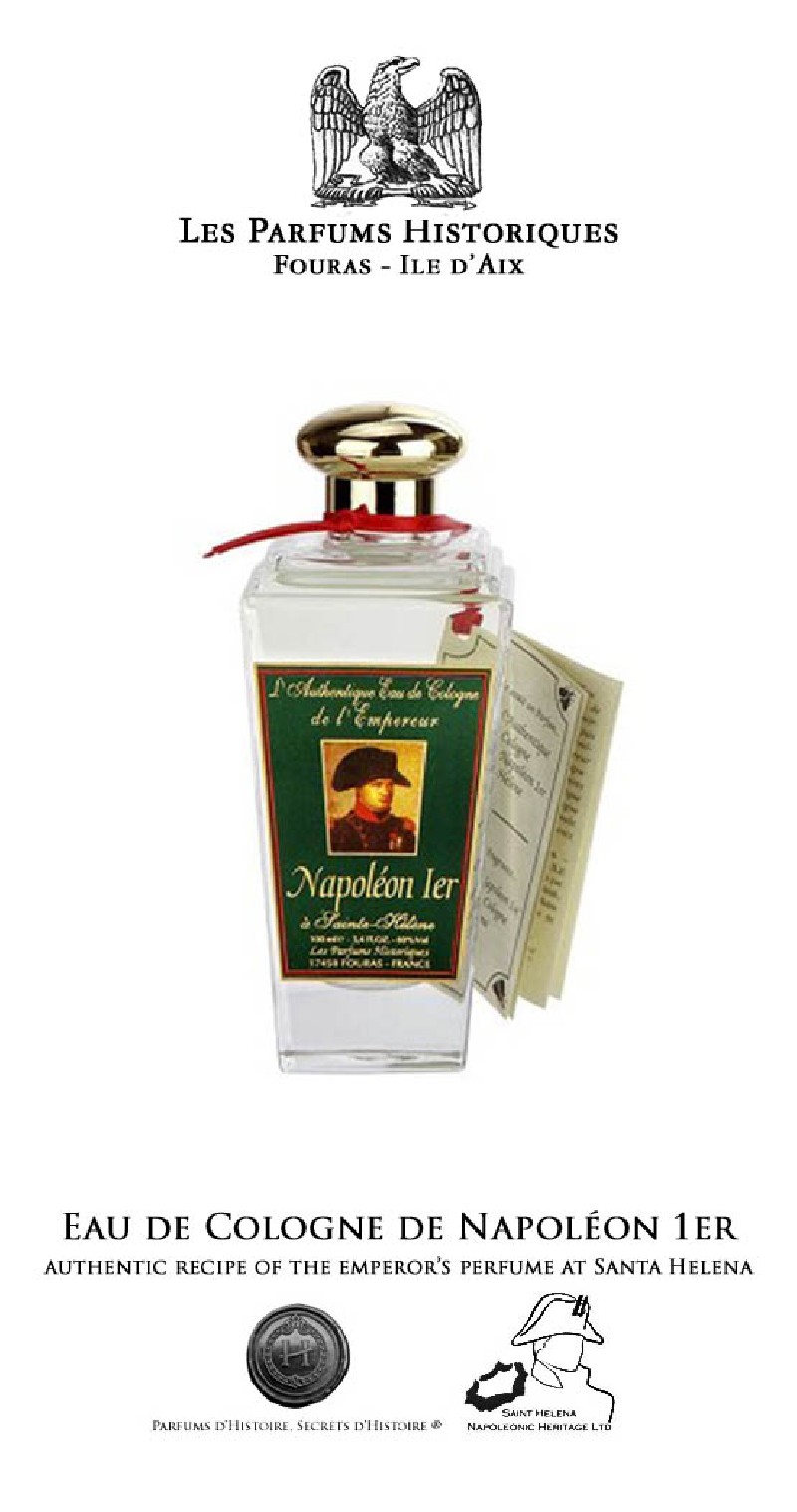 This Eau, fresh and subtle, made solely of natural essences of fruit and aromatic plants, is the reformulation of the historic and original recipe of Napoleon I’s Eau de Cologne at Santa Helena. It is a testimony of the Emperor’s refined taste, and the only olfactive memory of the Emperor.

When Man’s Strength falls asleep, There Remains a Power, Intimate and Personal, The Power of his Scent...

For his personal ablutions, the Emperor used copious amounts of “Water” said to be “from Cologne” discovered during his Italian campaigns (1796-1797 and 1800).

This “Eau de Cologne”, initially "Aqua Mirabilis", native to Italy and inspired by the recipe for “the Queen of Hungary Water”, was considered a medicine mainly because of its high alcohol content (Wine Spirit). This meant it was sold by apothecaries. Then on August 18, 1810, Napoleon I issued a decree forcing apothecaries to label medicines and to record their recipes’ ingredients, a requirement that still applies to pharmaceuticals today. To get round this, manufacturers of “Eau de Cologne” changed how they referred to their products, no longer calling them medicines but "Eau de Senteur" and permitting them to be sold only by “Glovers-Perfumers”. Thus “Eau de Cologne” became, definitively, a perfumery product.

During his exile on St. Helena, the Emperor began running out of his usual “Eau de Cologne” and, to remedy this, his second servant, the Mameluke Ali, managed to develop and locally produce a similar product based on documents and products found on the island. This allowed the Emperor to perform his daily ablutions (“faire sa toilette”) and this use of a scented alcohol product is, without doubt, the origin of the name "Eau de Toilette".

Ali’s handwritten recipe for this “Eau de Cologne” was passed to Jean Kerleo on June 4th, 1991 for the Osmothèque, a historical exhibition of the fragrance industry, by André Damien, Member of the “Institut de France” and former Mayor of Versailles, who had acquired it at a sale of ALI memorabilia at the Versailles Auction House in 1970.

Ali, whose real name was Louis-Etienne Saint-Denis, was born in Versailles on September 22, 1788 and lived in that city on rue des Réservoirs, opposite Montansier Theatre.

The “Emperor Napoleon I’s Saint Helena Eau de Cologne” has been reconstructed using the original recipe by Jean Kerleo and kept carefully at the Versailles Osmothèque which guarantees its authenticity and a venue where it can be sampled along with “the Queen of Hungary Water”.

This Eau de Cologne, made solely of natural essences of fruit and aromatic plants, is fresh and subtle despite the artisanal methods imposed by circumstances, and is a testimony to the Emperor’s refined taste.

A fragrance... and immediately a feeling: smell is an instinctive reflex, innate, uncontrollable capacity.

The sense of smell conjures up memories, allows us to transcend the temporal, to bring together the past and the present in a unified fresh sensation. A fragrance engraved in our subconscious mind transcending time, a sublime image opening the door to unlimited emotions.

The « Historical Perfumes – GESTOR sas », based in Fouras – Ile d’Aix, the last piece of French land to feel the Emperor’s footfall, faithfully manufactures and reconstructs, with the kind permission and valuable supervision of André Damien, Jean Kerleo and the Osmothèque, the “Emperor’s Authentic Eau de Cologne at Saint Helena” based on the original formula developed by Napoleon Bonaparte’s servant Ali.

Totally authentic, this Eau de Cologne constitutes a genuine collector's item and is the “only olfactory recollection we have of the Emperor”

History, Use, Composition and Manufacturing of Eau de Cologne at the time that Napoleon I was staying on the island of Saint Helena

History of the eau de Cologne

In 1725, Jean-Paul Feminis, of Italian origin, sets up in Cologne to prepare and sell his ”Eau Admirable” or “Aqua de Regina” the recipe for which he says he got from an Oriental monk. But this formula was already prepared in the Santa Maria Novallia convent in Florence since the 14th century, and was a great success. Indeed, it has been established that Jean-Paul Feminis knew one of the convent nuns well, Sainte Marie Clementine.

Jean-Marie Farina, his nephew, joins him in Cologne to assist him. They change the name of their “eau” and now call it " Aqua Colonisis " or Eau de Cologne and distribute it worldwide.

In 1760, the Eau de Cologne Jean-Marie Farina was introduced in France.

The future Napoleon I is born in 1769; at the same time, Mme du Barry ntroduced the Eau de cologne Jean_Marie Farina as a “toilette” fragrance at “the perfumed Court” of Louis XV (1769-1774).

In those days, eau de Cologne was used internally as much as externally.

By ingestion: This formula, developed in a convent for its therapeutic properties, like the "Cordial of Melissa of Carmes", acts or supposedly does against many diseases including nausea, vomiting, indigestion and dyspepsia, ulcers and gastric hyperacidity, liver failure, fever, rheumatism, scurvy, spasms, colic and intestinal infections, even against intestinal parasites... and impotence.

The essential oils that compose it are effectively powerful, recognized antiseptics.

By aspersion and friction: For applying body scent, of course, but also, by friction, as an antiseptic, healing and anti-pruritic remedy; as muscular stimulant and venous tonic; against insects bites and disagreeable effects of perspiration. Equally, as antiseptic for respiratory tracts by inhalation of essential oils volatilized on contact with skin.

Eau de Cologne was thus much more than simply a perfume, it was the basic component of a personal pharmacy.

Composition of the eau de Cologne

The eaux de Cologne of this period were perfumes of luxury and good taste with a fine and discreet bouquet.

They consisted of a mixture of aurantiaceae and labiatae essential oils, flowered with infusions of orange-blossom; the whole being dissolved in "Wine Spirit".

The "Wine Spirit" is simply ethyl-alcohol.

Galenically, they are alcoholates, that is to say a liquid obtained distilling alcohol on an aromatic substance or alcohol loaded with volatile agents of one or more aromatic substances. A batch can be turned into liquor by adding sugar.

It was very widespread and sought after as remedies.   For example, rosemary alcoholate was called "Eau of the Queen of Hungary", because it had, so it was said, turned a paralytic and gouty septuagenarian princess into a seductive young girl causing the King of Hungary to ask for her hand in marriage. It is also one of the ingredients of the "Vinegar of the Four Thieves".

Distillation is the basic galenical action for a such preparation.

For "Wine Spirit", Raymond Lulle, the "Enlightened Doctor" – a worthy nickname as researchers are indeed, always, personally involved in their work – indicated in the 13th century how to obtain "Aqua Ardens": just put wine in the bain-marie of an alembic and collect the first fractions distilled.

By redistilling it, this alcohol is refined, increasing its proof to about 90°, necessary to fully dissolve sufficient quantities of Essential Oils.

To obtain Essential Oils, immerse some fresh plants in three parts of boiling water in the cucurbit of an alembic, then promptly add the cap and the coolant, and distil until there are no more Essential Oils. These float on the aromatic water in the collection tank and have to be removed with a pipette.

Then mix the Wine Spirit with Essential Oils in the right proportion.

It was thus possible to manufacture Eau de Cologne using an artisanal process. Ali used this simple technique at Longwood like a kind of Robinson Crusoe, recreating with local resources and some saved supplies the conditions of his life in the world that he frequented before it fell apart.

Autres produits associés à "Objects of History of Napoléon I"